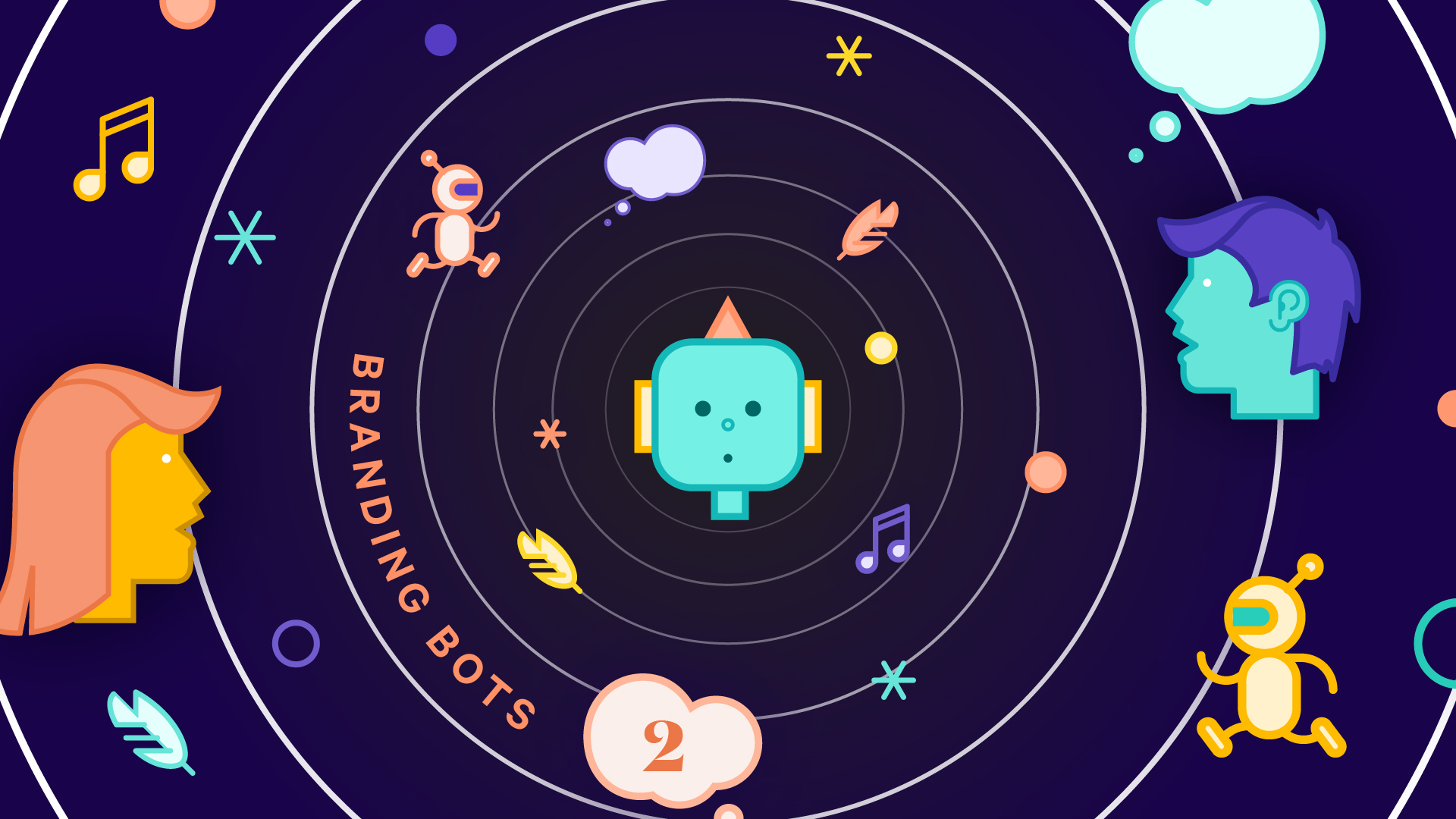 This is part two of my series on branding bots. Throughout the series, I explore the most important conversational branding elements and how conversation designers and teams can apply those elements to their voice and chat apps.

In Branding Bots Part 1, I review what voice and tone are and how they can represent brands in conversational apps. In this post, I cover persona.

Persona is the character that embodies voice and tone and helps drive the bot’s conversational interactions. Persona can be developed as a separate representation of the brand or as an internal writing device used by the bot’s design team to craft natural conversational interaction. Whether a brand uses a persona to develop a separate character or as design guidance, the persona must be defined and documented. Research your brand’s audience, competition, and market to create a persona that resonates with your users.

Similarly, it feels more natural for users to interact with a character that displays humanistic qualities. They can empathize better with a character that displays traits similar to their own. Humans tend to anthropomorphize the objects and characters they have conversations with, especially in voice interactions. When building a voice or chat app, consider how you can provide a better user experience by defining the bot’s persona.

All that being said, it’s okay if a character or mascot doesn’t make sense for your brand. Defining a persona is helpful when establishing a conversational brand even if you only use it as an internal writing device. That persona can make it easier to design a more consistent conversational experience for users.

Branding plays on various aspects of human psychology. There are a few useful psychological devices to keep in mind when creating the bot’s persona. As you define a persona and incorporate it into the bot’s designs, it’s important to test and gather user feedback to understand how the persona is being perceived.

Personality archetypes can play a major role in creating a conversational brand persona. Psychologist Carl Jung developed the concept of “psychological types” which later became popularized as “personality types” by Myers and Briggs. Jung postulated that character archetypes are immediately familiar because they represent common cultural expressions.  Archetypes have been used in storytelling throughout the ages—from oral story exchange to modern film. A few good examples of popular brands leveraging personality archetypes include Nike’s use of the hero archetype and Harley Davidson’s use of the outlaw archetype.

To create an engaging conversational brand persona, define a personality archetype for the bot and build upon it. Familiar archetypal traits can be used to engage with users more effectively and combined to add nuance to the persona. It might be helpful to assign an archetype to the bot’s users as well and think about how the brand archetype and user archetype interacts. For example, the bot could be the guide in the user’s hero journey.

Storytelling has driven technology and culture for millennia. Humans have used storytelling to create and exchange information. Narrative drives almost every aspect of our society from business, to industry, to science, and education. Storytelling is an effective conversational branding device that should be employed when creating the bot’s persona.

Stories help users understand complex ideas and empathize with the bot. The bot can drive conversations and improve user experience by incorporating elements of storytelling like setting, characters, tension, action, and resolution. The Cabbage Patch Kid dolls became incredibly popular in the 80s in part because of the stories the brand developed for each doll, complete with a birth certificate and adoption paper. You can employ similar storytelling tactics to create memorable experiences and effective marketing campaigns.

Malcolm Gladwell explores the concept of stickiness in his book The Tipping Point. Stickiness is the ability for ideas to crystallize in pop culture (slang and memes are great examples of this concept). Conversational brand personas should strive to be somewhat sticky. Conversational interactions, especially voice-first interactions, benefit when they are simple and story-driven and the bot uses memorable, emotive language that resonates with users.

Both humans and social media algorithms display bias for human faces. Humans are drawn to faces that look similar to their own because recognizing people has been essential to human survival. Therefore, it’s important to optimize for face bias when creating a persona if the bot employs a human or human-like face.

The baby-face bias is the propensity for humans to be attracted to people or characters that have baby-like features such as big eyes, small noses, high foreheads, and small chins. The audience response that little Groot from The Guardians of the Galaxy elicits is an example of baby-face bias. When you design an avatar for the bot, think about taking advantage of the baby-face bias to delight users and make them more sympathetic if a conversational experience falls short.

Similarity bias is the tendency for humans to like and trust people and things that are familiar to them. Wired for Speech includes an overview of a study in which introverted and extroverted subjects interacted with voice apps that exhibited either introverted or extroverted qualities. Those who interacted with voice apps that matched their disposition (i.e. introverted subjects interacting with introverted apps) were more likely to rate the information they received from the apps as credible. Keep similarity bias in mind as you conduct user research to inform the bot’s persona.

💡 Tip: The persona of a chatbot should never lead users to think it’s an actual human. Make it clear to users that they are speaking with a bot. Be especially cognizant of times when users might assume they’re speaking with a human rather than a bot, such as in customer support situations.

The name of the bot can appear in many places such as marketing materials, social media pages, website, and the conversational app itself. If you’re creating a new conversational brand persona, engage in a naming process and establish rules for how the brand name and the bot’s name are used alongside each other.

Avatars are the core visual brand component available in conversational channels, especially chat and smart display apps. Brands that use a persona should visualize the character as the avatar. Otherwise, the brand’s logo or core visual element make good avatar options.

Smart display apps built for Amazon Alexa and Google Assistant also display avatars during the bot interaction. The avatar makes the first impression with users and can communicate the conversational brand persona in many places across voice and chat channels.

Brands can also use companies like Uneeq and Soul Machines to create their virtual avatars. These virtual avatars dynamically react to users in conversational interactions and make the interactions seem more natural. Choose the avatar option that aligns best with your defined brand.

When designing a voice or multimodal app, the voice selection has a huge impact on the bot’s persona. Voice channels like Amazon Alexa and Google Assistant limit the synthesized voices available for brands to use. External services offer a wider range of options and brands can also use voice actors to serve as the bot’s voice.

Alexa has a defined female voice that designers and developers cannot change. Alexa is the assistant users ask to carry out the particular action of the brand’s skill. It places the brand’s bot in the domain of Alexa's persona; the Alexa assistant then asks the brand’s bot to perform the task.

Voice selection is becoming more varied as voice synthesis improves. Services like Lyrebird, a voice synthesis API, can mimic actual human voices. Resemble.ai and VocaliD are also innovating in the space to offer brands a broader synthesized voice selection. As AI advances, it’s entirely possible the voices bots use will be as varied as human voices.

Gender often has to be considered when developing personas for bots. In a chat app, it's easy for gender to be ambiguous. However, voice and multimodal apps will need to address the question of gender during voice selection. Most synthesized voice services conform to gender- binary voice options which limit bots’ gender expression. However, new synthesized voice services like Q, the first genderless voice, offer non-binary voice options for use in voice and multimodal apps.

Consider the social implications of gender when creating a conversational brand. Discussions about sexism are varied and vibrant in the context of branding bots. Discuss the bot’s gender, or lack thereof, and how it weaves into the brand story. Be cognizant of how gender relates to the bot’s users. Prepare to field questions and have conversations about the bot’s assigned gender.

Extend the Brand to a Persona

Like any branding process, creating a conversational brand persona can be daunting. When you want to establish a persona for the bot, it helps to start with the thought experiment: “If this piece of technology was an actual human carrying out these tasks, how would it talk?” This exercise helps you understand the domain of the persona and the situations to which it may have to react. As you research the bot’s users, competitors, and market, further refine the bot’s personality traits and persona. Always test the bot’s persona with users. Testing a prototype will help you understand how the conversational branding choices you make affect users, especially when it comes to voice selection.